I think I've already expressed how these universal carseat carriers are smarter than your average stroller. Until your baby is too big for the infant carseat, why bother dealing with strapping in and out of the carseat only to then be strapped in and out of a stroller and then back again? Why shlep a heavy stroller when you can just snap your carseat into a lightweight frame? And last but not least, for the car-less ones of us out there, universal carseat carriers are a lifesaver when using cabs when you can't just leave the carseat in the car.

It looks like there are four universal carseat carriers on the market: The Graco Snugrider Car Seat Frame, the Kolcraft Universal Carseat Carrier, the Baby Trend 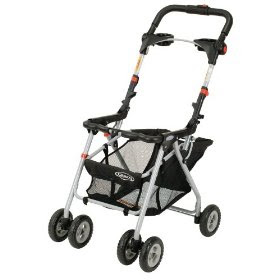 Snap N' Go Stroller, and the Maclaren Easy Traveler Stroller. They each have all the basic features: A place to snap/strap the carseat in, a large basket, cupholders/tray, and an easy fold. Let's look at some of the difference.

BASKET: The Kolcraft by far has the biggest basket (though they all really have large baskets) and it is easily accessible while the carseat is attached. It extends so far back, however, that people with a long stride may end up kicking it. The Snugrider's basket is great, but a bit hard to get to while the carseat is snapped in. 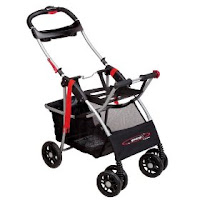 HANDLEBARS: The Snugrider is the only carseat carrier with a telescoping handlebar, making it nice and comfy for taller folk. The Maclaren one has their signature high handlebars, so that's also a plus (note: they are also their signature umbrella handles, unlike the other carseat frames which have just one single bar). The handlebars on the Kolcraft and Snap N' Go are a bit low for a tall person, but totally comfortable for me (I'm almost 5'5"). 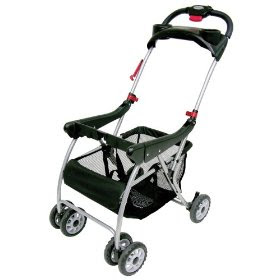 FOLD AND WEIGHT: They are all light, but the Maclaren is the lightest at 10 lbs. The other ones range between 12-15. They all fold easily, but I'm told that the Snugrider has a two hand fold even though the manufacturers claim that it's one handed.

CARSEAT ADAPTABILITY: They all take a wide range of carseats, but the Snugrider only accepts Graco carseats (the SnugRide and SafeSeat). They all snap in and feel secure, but the Kolcraft only straps in and does not seem so secure. 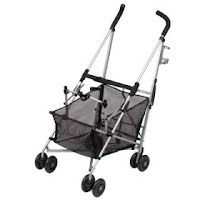 PARENT TRAY/CUPHOLDERS: The Snap N' Go has the best offering with two deep cupholders and a covered tray. Kolcraft's cupholders are shallow so drinks tip over. The Snugrider doesn't have a tray, just two cupholders. And the Maclaren only has one cupholder.

Which one is the best? Well that depends on which features are most important to you. I personally like the Snap N' Go because of the great parent tray and the easily accessible large basket, but it was a little short for Menachem (oh, and it was stolen). We now have the Kolcraft and I'm just a bit wary about the security of that strap. Kim and Yoni seem happy with their Snugrider, but sometimes have to take the carseat out to get to the basket. If you don't have a Graco carseat though, then obviously that's not the choice for you.

The Maclaren is the only one that I don't have experience with. It's the lightest, and that's nice, but I'm a tray kinda girl -- I like space to put things. I don't just want one kinky cupholder. I want more.
Posted by Sarah on Tuesday, April 28, 2009

Labels: car seat, getting around, strollers