Best for your Breasts

When my first child was a few months old, I developed what my lactation consultant and my doctor thought was eczema caused by nursing (if that's even possible). After suffering the same thing with my second child, I discovered it was actually contact dermatitis caused by an allergy to disposable nursing pads. I tried the cheapo brand, I tried Johnson's, I tried Lansinoh, and then I finally discovered two products that made all the difference. 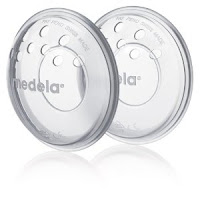 When I absolutely couldn't have anything against my skin, I used Medela SoftShells. These silicone shells keep a safe distance between your breast and your clothing. The vents provide for natural air flow, to help raw nipples heal faster. While they claim that their "natural contour" is discreet under clothing, I didn't find I could wear them out of the house without looking ridiculous. Also, I don't recall them coming with the reusable inserts to absorb leakage that they now include, so when I was done with them I had to dump some milk out. I don't know if they didn't come with those inserts two years ago, or if I was just so eager to start using the shells that I didn't notice anything else in the package. Either way, these shells will get you through the rough spot (no pun intended) until your nipples heal. They're $14.95 a pair, but you can't put a price on happy nipples. 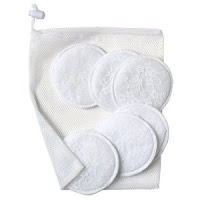 For excursions outside the house and for general use after healing, there is nothing like 100% cotton nursing pads. Not only was my painful problem resolved, but I saved lots of money and helped the environment, too. A set of six pads (three pairs) can be bought for as little as $5 in stores (they are made by many, many brands). Instead of throwing them out and buying more, you just throw them in the wash and use them over and over again. These Philips Avent ones ($5.99 for six) even come with their own little laundry bag. They draw moisture away from the skin and trap it behind a leakproof liner. Plus they have an anti-slip outer layer to keep them in place, and they're lacy so you feel a little more sexy and a little less like a mother cow.

oduct, which I have not yet gotten a hold of (and hope I don't need to), is something I have read about on various nursing mothers' forums. The Silverette is a nipple cup made of pure silver, which supposedly heals nipples faster than anything else (within 24 to 48 hours). I haven't seen any research to back this up, but if your baby has a poor latch or bites and you get nipple cracks, you'll be willing to try anything. Unfortunately, it becomes a vicious circle because even if the cracks begin to heal, every time you nurse they open back up again. Last time I contacted the company (a year ago), a pair of Silverettes cost 34 Euro plus 6 Euro shipping. They only ship within Europe, but they are willing to work something out with you, especially if it's an emergency. I ended up not needing the Silverettes, but the next time I have a baby I will not hesitate to order them at the first sign of a nipple crack. They are also meant to be used as a preventative measure, but I'm not sure I'm willing to shell out 40 Euros (almost $50) "just in case."
Posted by Netanya Carmi on Wednesday, June 23, 2010