Sleep: The Most Precious Commodity

I have been staring longingly at these products on and off for months, and I think it may be time to bite the bullet and choose one. I think maybe the reason I haven't ordered one, is because I'm afraid that if this doesn't rescue me, I won't have many (or any) options left.

My kids are early risers. Really early. WAY too early.

My daughter (almost 4) has started sleeping better and longer since we got rid of her nap a few months ago. But there are still times she'll wake up early and I can't get her to go back to bed because her brother is already up - and it must be morning if hes up, right? My son (21 months) has been getting up at 4:30 every morning for over a year. I'm not sure he's quite old enough to get the hang of this yet, but I'm willing to try anything. 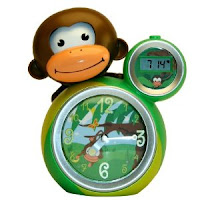 The basic premise of these night light/alarm clocks is you set them for the earliest time you would allow your child to leave her bedroom or take her out of her crib. (Be reasonable, folks. While it would be nice to stay in bed in until 9:00, you can't expect a young child to sleep past 6:00 or 6:30. Some do, and to their parents I say: I hate you!) Anyway, when your child wakes up, if the "night" setting is still on, she knows she has to go back to sleep (or at least sit in her room and stare at it until it changes). If it has switched to the "morning" setting, she can come out and bother you.

The BabyZoo Sleeptrainer ($34.99) is absolutely adorable. Momo the monkey "sleeps" all night, and opens his eyes in the morning. One thing I love about it is that it has both a digita 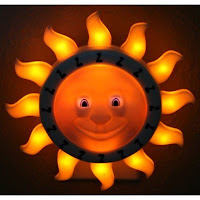 l and an analog clock, which is great for teaching time-telling to your child. It also has an optional night light and alarm clock, and comes in shades o green or a pink/blue combination.

Some cons I have read about this clock are:
The digital clock only has a 24-hour mode (meaning at 7 pm it will read 19:00, which is confusing)
It ticks loudly
The nightlight wears out the battery very quickly
Intelligent kids will just open Momo's eyes themselves and say "Momo's awake, it's morning!" 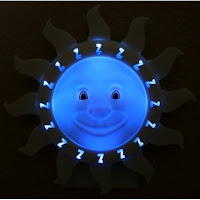 simpler product. It's a night light with a moon face that glows all night and then turns to a sun face at the time you set it for.

The Stoplight Sleep Enhancing Clock ($36) has a traffic light that glows red for "Stop - Don't get out of bed!" and green for "Go wake up Mommy and Daddy!" The green light stays on for an hour (which means that if for some reason your child sleeps more than an hour longer than you expected, she might wake up confused.) It has only a digital clock.
It comes in four styles: teddy bears in pink or blue pajamas, or a boy or girl driving a car. Even though the car vers 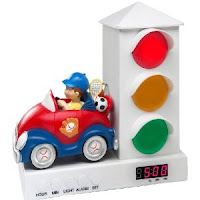 ions are adorable, I'd probably get the teddy bear in blue because it's the most unisex and therefore I could use it for children of both genders without hearing an argument about it.

The OK to Wake! alarm clock/night light ($29.95) glows yellow all night and green when it's time to wake up. It also has a second timer you can set for nap time! The clock itself is white with interchangeable bug (green) and flower (pink) bezels. The clock's digital-only face is not backlit, though, so if your child wakes up in the middle of the night she won't be able to see what time it is without pressing a button. Also, some consumers complained that the difference between the yellow and green lights is negligible and it may be hard for kids to tell the difference 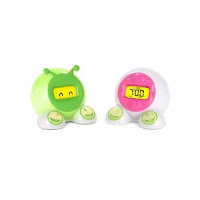 . Some people who bought this product wished they'd bought its cousin:

The Teach Me Time Talking Alarm Clock and Night Light ($39.95). This seems to be the only one that can be plugged in so as not to waste batteries. (It also has a battery option.) The clock is white with interchangeable blue, pink and yellow bezels. It has both an analog and digital clock, and can glow yellow all night and green in the morning or just green at wake-up time, if the light bothers your child at night. You can also set the time for the green light to turn off, as opposed to some of the other clocks where it turns off automa 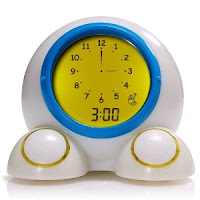 tically after an hour or two. Kids can also press a button and the clock will tell them the time aloud! It also has an interactive game to help kids learn to tell time. Parents complain that it this clock is complicated to program.

Finally, there is the My Tot Clock ($59.95 on Amazon, $49.95 through the manufacturer). This clock glows blue at night and turns yellow when it's time to wake up. It also has added features that would never have occurred to me in a million years - and they're brilliant! There is a red "discipline" clock that you can set for time-outs and a green "encouragement" clock for positive activities - how long you want them to sit on the potty, how long they can play before it's time to get ready for bed, etc. You can buy decorative faceplates for it ($9.95 each - why bother?) or additional cartridges (also $9.95 each) that will read a variety of classic stories to your child, although it seems that the lullabies, wake-up music, and white 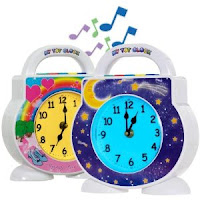 noise are the same on every cartridge. That's right, it will play a lullaby (your choice of five classics) for 30 minutes, and white noise (ocean waves) all night if you want it to. And your kids can wake up to "If you're happy and you know it" - but who would want to wake up their kids at all? I say let 'em sleep! You can set different volumes for each feature, and it even has an override button so you don't have to totally reset the clocks when "life happens." Despite all these settings, parents say it is easy to program.
On the con side, this clock only has an analog face, and the sound quality is said to be poor. And of course there's the price tag.

After all this research, my only question is, do I get the Good Night Light or monkey clock because my not-yet 2-year-old will understand them, or one of the other clocks that might be more useful in the long run?
Posted by Netanya Carmi on Wednesday, June 30, 2010