I've never been a very musical person. I like to draw, I like to read, I like to write. I can barely carry a tune. If I had it my way it would be quiet all the time. I never turn on the radio or music to keep me company. But I make an effort to expose my kids to music. Just because it's not my thing doesn't mean i 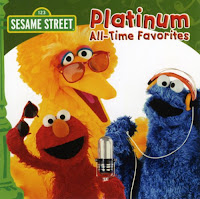 t can't be theirs. I have to admit, though, that after buying some great CDs for them, I need some help remembering to turn them on!

Remember those big, round, flat black things? I think they were called records. Well, I have this vague recollection of songs coming out of them. Great songs. Songs by my some of my favorite artists. Like Ernie, Cookie Monster, and Oscar. So I Googled it, and whadya know, they made that awesome record into a CD that our kids can listen to. Sesame Street Platinum All-Time Favorites ($10.99) has all the classics, from "Rubber Duckie," "C is for Cookie," and "I Love Trash" to "The People in Your Neighborhood," "Fuzzy and Blue," and "It's Not Easy Being Green." This was the first CD I bought for my kids, and I love it.

Far more memorable than records for a child of the 80s are cassette tapes. In fac 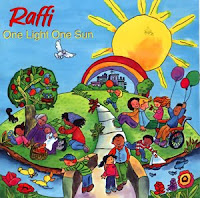 t, I still have a house full of them. On roads trips we used to rock out to Raffi. We only own one of his CDs, One Light, One Sun, though my mom claims she still has a bunch of his tapes somewhere. Playing this disc for my kids, with songs like Apples and Bananas, Take Me Out to the Ballgame, and Octopus's Garden, always brings me back to my childhood. And who doesn't kvell when they hear the line "Moshe lives in Israel" in the song "Like Me and You?"

I don't think we ever owned an Uncle Moishy tape. We just weren't that frum. But I secretly loved hearing his songs about Torah and Mitzvot when I was playing with my rabbi's kids. So far the only Uncle Moishy album in my home is Uncle Moishy Live, but when I put it on, I just can't help getting exciting and cheering for songs with great values and important m 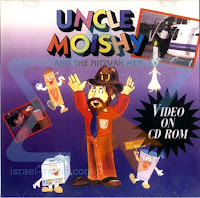 essages about Shabbos, Kashrut, and the Jewish Holidays. And my kids could listen to "Hashem is Here" all day long.

Finally, let me give a shout-out to one of the most brilliant Jewish artists out there. Lenny Solomon and Shlock Rock used to accompany my carpool to and from school every day, and they are still going strong, coming out with new albums to add to the 30 they have produced so far. Although they sing original music (in Hebrew and English), they are best known for their parodies of popular songs. I heard "We've Got a Strong Desire" long before I had any idea who Billy Joel was. Having grown up listening to classic rock with my dad, I enjoyed parodies of songs I recognized such as "Pretty Woman" and "Barbara Anne." It gave me a thrill to hear Lenny sing about people and stories I'd learned in school - the Biblical women in "Eshet Chayil," the Torah commentaries in "Abarbanel." And long before the possibility of Aliyah had even entered my mind (I was only six when it came 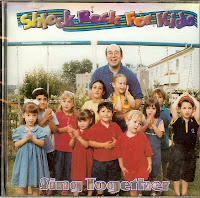 out), "Making Aliyah Today" was pulling at my heartstrings. (Lenny himself made Aliyah a full ten years after coming out with that song.)
I don't currently own any Shlock Rock music and don't really know where to start. Should I just get the first disc (and the first Shlock Rock tape I owned as a kid), Learning is Good, and move forward from there? But now they have CDs geared specifically to kids, like Sing Together, which I'm going to have to check out. And cracking up while skimming the list of Shlock Rock's songs and the songs they parody ("To Maariv"/"Tomorrow," "Tekia"/"Maria," "Did You Hear the Rav Last Night"/"Can You Feel the Love Tonight," "Soup and Challah"/"Supercali(fragilisticespialidocious)", I think I might just have to order Almost on Broadway.

Small confession: I got the above-mentioned CDs within the first year of my daughter's life. (She's almost four.) I haven't bought music in ages because it's just not central in my life. I don't even remember to play the CDs I have, so as much as I want to go out and buy more CDs by these artists, I'm not sure I can justify filling my home with things that are probably going to sit around and collect dust. Maybe I should set a music reminder alarm on my phone every day, so my poor kids won't be so deprived.

Or maybe every other day. I'm not sure I'm ready for that much music in my life yet.
Posted by Netanya Carmi on Wednesday, July 07, 2010