Here are some oldies but goodies that make excellent baby gifts. Some toys just never go out of style! 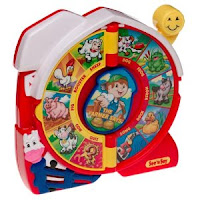 Here is a variation on a classic. When I was a kid, these had a pull string and were slightly larger. This is basically the same idea, but instead of string, you pull a level. It was a bit hard for Hila as a 1-1.5-year-old, but now she's got it down. The arrow points to an animal and then says (depending on the animal), "The cow says moo." This one switches off and says, "Where is the cow?" And then there are two arrow that point to songs, either The Farmer in the Dell or Old MacDonald. Cute, not too annoying, and educational! 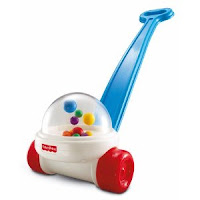 FISHER PRICE CORN POPPER PUSH TOY
This toy proves that you don't need music and batteries for a toy to be annoying. If we had a balcony or a backyard, that is where I would keep this toy. I don't know--now that I'm writing about this toy, I'm starting to like it less and less. It really gives me a bit of a headache from the loud popping noise and you can barely carry on a conversation when it's being pushed around. 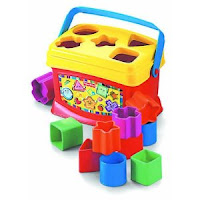 This one really tops my chart. Hila played with it when she was barely one and still plays with it today (almost 2). It used to be a struggle for her to get the blocks into the correct holes, and now she does it quickly and effortlessly. There's the manipulative aspect of getting the blocks in the holes for when the baby is young, and then as she gets older, it's great for teaching about the names of the shapes and colors. One complaint: The top doesn't snap on as I'd like it to. But still--three cheers for quiet toys that make my baby happy! 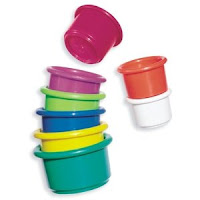 STACKING CUPS
Hila plays with these stacking cups (specifically The First Years Stack N' Count Cups) in the bathtub. And, for almost two years now, they have been her only bath toys (plus a few rubber duckies). Granted, she's getting a little bored of them and could use some more water toys, but still, they've provided quite a bit of happy playtime in the bath. (Note: These cups may give your kid the idea to drink bath water, but the small holes in the bottom of each cup will cut back on the amount of bath water that actually makes it to the lips.)