A Good Night's Sleep for Everyone with Ocean Wonders Aquarium

When my daughter was born, we got the Fisher Price Ocean Wonders Aquarium as a gift. I say "we" because it was as much a gift for my husband and me (OK, me. He can sleep through anything) as it was for Eliana. 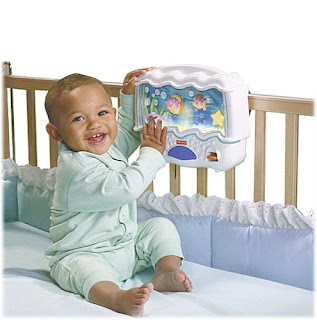 baby, she loved to watch the toy fish and listen to the soothing music. When she got older and I was sleep-training her, I would turn it on to keep her company until she fell asleep. The music, glowing lights and bubbles (which you can choose in several different combinations - music; lights and bubbles/ocean sounds; all three - last for 7 minutes in this version, although on mine (many, many years old since it was a hand-me-down and we received it 4.5 years ago) it lasts for 18. At first I had to go back in and turn it back on if Eliana hadn't fallen asleep after 18 minutes, but eventually she learned to do it herself. It also has a couple of knobs and switches to make the fish move, if your child needs something to do before dozing off.

Eliana would turn on her aquarium if she woke up in the middle of the night, and soon didn't cry for me to come comfort her and put her back to sleep anymore. I don't know who was more attached to it, her or me. I brought it with me when we went away for the weekend, just in case. (I guess this kind of attachment could be seen as a drawback, but I never saw it that way.) 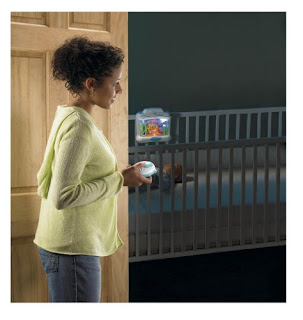 never looked at the price until today and cannot fathom why it costs $199. But there is another version that's only $75. It does stay on for 18 minutes and also has a remote control, so if your baby's not old enough to turn it on herself, you don't have to go into her room to do it for her! So I don't know why anyone would shell out $199 for the other version. The cheaper one doesn't seem to have the knobs that turn it into a crib toy, but my kids barely played with those anyway.

I just discovered an added bonus to this aquarium. My son, Ami, inherited it when Eliana grew out of it and at 2, still uses it in his crib. (Although sometimes he gets mad at me for telling him it's bedtime and turns it off in protest.) I usually keep it on the "just music" setting so my kids weren't even aware that it had lights. The other night our 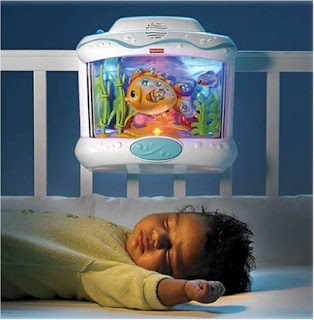 power went out and Ami totally freaked out. I scooped him up, put him in his crib, turned the aquarium to the "lights, bubbles and music" setting, and he lay down happily to watch the fishies while I went downstairs to hunt for flashlights and candles. Problem solved!

One note: Attach your aquarium to the side of the crib that's up against a wall. I'm not sure I believe him, but my husband claims that Eliana once climbed out of her crib when she was pretty young. (I think he might have just forgotten to put her in in the first place.) Clever kids might use the aquarium as a step to climb up and over the crib rail, so better to be safe than sorry.

Ask questions and get parenting advice on Netanya's blog, Dummies for Parenting - because we all feel like dummies sometimes when it comes to parenting.
Posted by Netanya Carmi on Tuesday, December 21, 2010