I highly highly highly recommend you get your kids a dog. I think every child should grow up with a dog. I only had one till I was about two years old. I don't really remember her but I see in photographs and old home movies how happy I was to have her around. 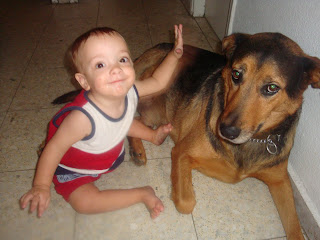 We got Coby about a year and a half before Eliana was born. He's a mixed breed. Part German Shepherd, part kitten, we always say. We're not sure he realizes he's a dog. If I sit on the floor he tries to curl up in my lap. He has no idea he weighs almost as much as I do. He'd sleep all day in a patch of sunlight by the window if you'd let him.

Before I had kids, I had a baby visiting at my house one day. The baby was napping on my bed, and when he started to cry, Coby charged at me and started barking (Coby NEVER barks) as if to say "The baby's crying! Do something!"

Coby is the gentlest creature. He lets the kids climb all over him and use him as a pillow or a couch. One rainy day we covered him with stickers, and call me evil, but once we even polished his nails (blue, of course. After all, he is a boy). We love to dress him up in costumes too. Sometimes for Purim but sometimes just for the heck of it. And you've gotta see this video of Eliana, age 9 months, trying to pull his ear off.

Dogs are great for kids. Growing up with a dog (or other furry pet) helps boosts your child's immune system and therefore s/he is less likely to develop allergies. It's also so important for kids to not be afraid of dogs. I feel bad for kids who are afraid of dogs - they miss out on so much. I feel worse for the kids whose parents perpetuated their own fear of dogs onto them. We had very sweet neighbors when my kids were younger, and they never let their kids come over once to play because they were terrified of dogs. I tried to explain to them that Coby's really more like a cat, but that was a no-go - they were also afraid of cats!

Coby has actually cured more kids than I can count (and a few parents) of their fear of dogs. Just about two weeks ago a little boy came over to play. He was hiding behind his mother's legs when they walked in, but two hours later he was sitting on the floor, stroking Coby lovingly and complaining that he didn't want to go home.

Coby is a great babysitter. He keeps the kids busy and distracts them so grownups can get things done. And all he charges is a belly rub! We bring him to synagogue every week and tie him up outside. The parents thank us because their kids sit outside with Coby and they are free to sit in the sanctuary and pray (or socialize).

Studies show that kids learn empathy and from having a dog, although mine have mostly learned how to protect their food. Anytime Eliana eats anything she asks "Does Coby like (fill in the blank)?" "Does Coby like macaroni and cheese?" "Does Coby like potato chips?" "Does Coby like green beans?" Kids also get used to a healthy lifestyle by participating in daily walks when they have a dog. Rain or shine, Coby has to be walked. There's no sitting around on our bums all day.

As my kids get older, they will also learn their share of responsibility from taking care of Coby. They already love to fill his food and water bowls and help me hold the leash when we walk him. 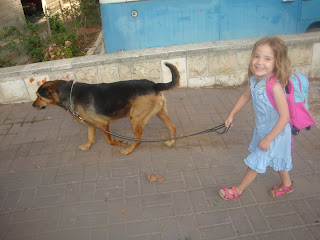 And they know that when we go away we have to think ahead and find accommodations for Coby. Having a dog prepares kids for going out into the real world and fulfilling their obligations. It can also teach them lessons in cause and effect: Yesterday when we were out, Coby ate a whole bag of sugar off the counter. When we woke up this morning, there was vomit all over the floor. Ask my kids and they will tell you that too much sugar makes you throw up!

It's important to do your research before you get a dog. Rescue one from an animal shelter rather than buying a puppy mill puppy from a pet store. Purebreds are pretty, but mutts are actually smarter and much healthier because they don't have genetic diseases from all that inbreeding. Puppies are cute but they're a lot of work. Coby was 9 months old when we got him and he was fully trained (not to have accidents in the house. He doesn't do much other than that.) I like big dogs because they don't yap incessantly like some small dogs do. (There are plenty of big dogs that bark, but a deep bark is nowhere near as annoying as incessant yapping.) Big dogs have bigger bladders, too, which means you have to walk them less frequently. Some breeds are better than others with children. Coby is a Shepherd in the truest sense of the word; my children are his sheep.

A couple of last words of advice: Know what you're getting into before you take your dog home. There's nothing sadder for a child or for a dog than giving up after a couple of weeks and taking your puppy back to the pound.

And please get your dog spayed or neutered. Not only to help control the pet population. If your dog is not neutered by the time he hits puberty (around age one), chances are he'll start being aggressive with other animals. You can prevent this by neutering him when he's young, but if you wait, nothing can be done. We learned this the hard way. (What can I say? No dog is perfect. Not even Coby the Wonderdog.)

Ask questions and get parenting advice on Netanya's blog, Dummies for Parenting - because we all feel like dummies sometimes when it comes to parenting.
Posted by Netanya Carmi on Saturday, December 25, 2010