I once wrote about the Cloud B Ladybug Constellation Light (which I never got), and now I see that that is just one of many soothing Cloud B sleep aids.

Hila sleeps just fine now (well, not lately, but in general), but she certainly didn't start out that way. I'm hoping No. 2 will sleep eagerly and successfully from day 1, but I know that's highly unlikely. (Don't all mothers-to-be assume that their baby will be the angel baby who sleeps through the night at three weeks?)

I want one of these. They look cuddly and I like that the sounds and/or vibrations can be set to go off for up to 45 minutes. 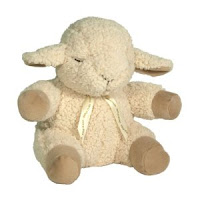 Cloud B Sleep Sheep -- I've seen this in stores and it really is cuddly. This one plays four soothing sounds -- mother's heartbeat (weird, but supposedly effective), whale songs, ocean surf, and spring showers. This one plays for 23 minutes before shutting off. It also comes with a velcro strap so you can secure it to the crib. 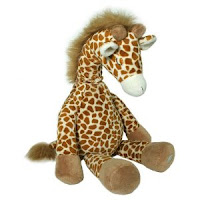 Alternatively you can get the Cloud B Giraffe. This one has a 23-minute and 45-minute option and plays the following four sounds: safari groove, safari trail, Victoria falls, and mother's heartbeat. Those don't seem as soothing as the sheep sounds. 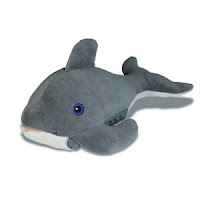 . This one also lasts for 23- or 45-minutes and offers the following: dolphins playing, whale song, tranquil melody, and ocean waves. Those sound nice, but the sheep is cuter.

So I vote for the sheep, even though it only plays for 23-minutes. My angel baby will fall asleep long before that anyways. :)
Posted by Sarah on Thursday, February 03, 2011